Skip to content Menu Close
Harry Gregory January 13, 2021 News
An informal consultation has been opened seeking feedback on initial proposals to expand the Rampion Wind Farm off the Sussex coast. Rampion 2 could create clean, renewable electricity to power over one million homes in the UK in addition to Rampion’s existing generation. Feedback from this first consultation will help refine more detailed proposals which will be prepared for a second consultation later this year.
An offshore ‘Area of Search’ is being assessed to identify the optimum site for a maximum of up to 116 turbines, the same number as the existing Rampion Offshore Wind Farm. A subsea export cable is proposed to bring the power ashore under Climping beach, with an underground onshore cable route required to bring the power inland to connect to the national transmission grid at Bolney, where three potential sites are being considered for a new substation.
You can visit our ‘virtual village hall’ exhibition and give your feedback from 14th January to 11th February at www.Rampion2.com
The Harbour Master along with fishermen, mooring operators and other stakeholders have fed into the the earlier phases of the consultation process and continue to be invovled in Navigation Risk Assessments and other planning. 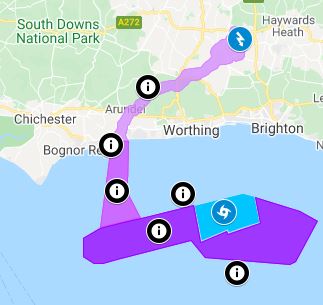